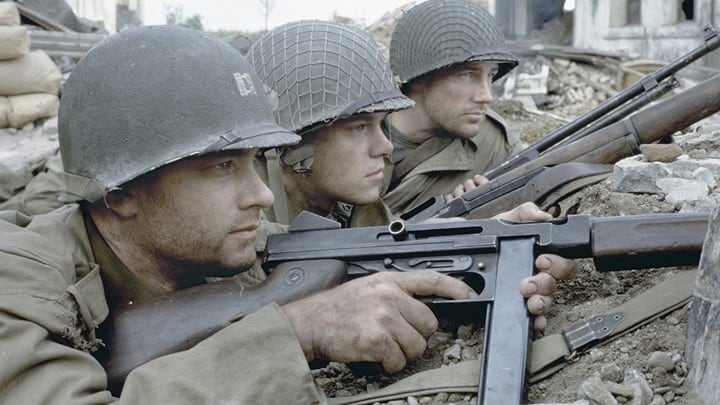 A war film like no other, #19 easily deserves its spot.

A great cast, a wonderful story, from one of the greatest directors of all time, loved by everyone. 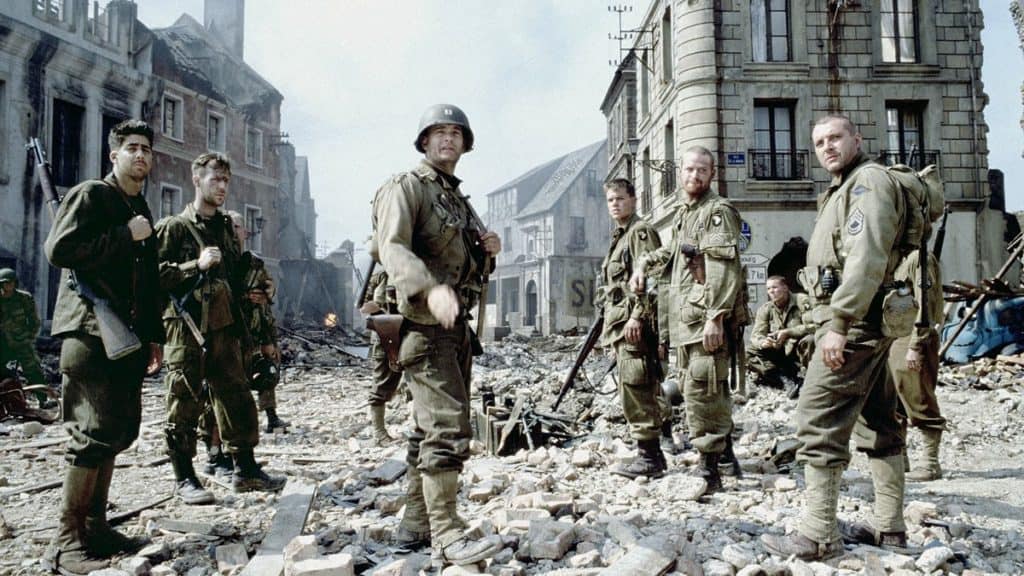 Saving Private Ryan is quite possibly, the greatest war movie ever made.

At least, it is in my opinion.

I can still remember sitting down in the theatre to watch it, way back in 1998, hoping to see nothing more than a well-told, World War Two story.

It starts like any other standard war movie; an elderly veteran (Harrison Young) collapses in grief at the grave of an unidentified soldier, and the movie quickly shifts into a flashback of the 1944 Normandy Invasion.

I was not prepared for what came next. Nobody was.

The opening twenty-minutes-plus battle scenes were (and still are) unparalleled in the history of cinema. We get a quick glimpse of Captain Miller (Tom Hanks), preparing himself for what he knows is going to be a bloodbath, before all Hell breaks loose.

The brutality of war, the randomness and in many cases, the futility, is brought to the forefront of these intense scenes. Many of the invading soldiers don’t even get off their boats, mowed down by enemy gunfire the instant they arrive. Many more are cut down in the water and more still, wiped out as they attempt to take the beach.

Director Steven Spielberg could have won his Academy Award for these scenes alone. In fact, he captured the reality of the situation so perfectly; many D-Day veterans around the world had to leave their theatres, emotionally-distressed. Visits to PTSD counsellors also sharply rose after the release of this movie, an eerie compliment to its authenticity.

Spielberg also pulls most of the colour from the film, giving the viewer a subconscious feeling of the forties, but also a bleak insight into the everyday lives of the wartime soldiers, whose day-to-day existences have become as washed out and empty as the movie’s colour palette.

Spielberg surprisingly doesn’t take sides, either. He doesn’t present the Germans as cartoonish, all-out-evil villains, nor are the U.S. soldiers portrayed as heroic or righteous paragons of virtue. Both sides are as good (or as bad) as each other, shown to be mere soldiers, following orders and fighting to win, trapped in a nightmarish scenario most of them don’t even understand.

While stories about a single unit during wartime are hardly rare, this movie takes that trope and puts its own spin on it, as Miller’s men are tasked with finding a single soldier: one Private James Ryan (Matt Damon), so he can be sent home after his three brothers have already been lost on the battlefield.

The idea that Miller and his team are considered almost expendable, so long as they find Ryan, hangs over the film (and its characters) like an ominous cloud. The longer the film continues, the longer we start to think these guys aren’t going to survive, let alone accomplish, their mission.

The cast is outstanding. Tom Hanks gives one of his greatest performances, and with movies like Philadelphia, Cast Away and Forrest Gump on his resume, that’s saying a lot.

As Captain Miller, Hanks plays up to his ‘everyman’ reputation, but also has to become a leader of men, despite constantly second-guessing himself. Miller is shown to be a man weighed down by the fact that many men have died under his command, sometimes due to his own decisions. This is highlighted in the story by his hand tremor, an affliction that seems to amplify under mental stress more than physical.

Hanks’ best moment comes when he finally reveals his former occupation to his squad, the only way to diffuse the tense situation between Private Reiben (Edward Burns) and Sergeant Horvath (Tom Sizemore).

Miller’s obvious lament for his old life as a teacher spills out of Hanks in this scene. It’s brilliantly written by screenwriter, Robert Rodat, and of course acted by Hanks, who plays the scene with a sad sense of resignation. It’s at this point we realise Miller doesn’t believe he’ll survive the war.

The aforementioned Edward Burns as Reiben and Adam Goldberg as Private Mellish add a much-needed levity to the otherwise heavy material. Barry Pepper as sniper, Private Jackson, who believes his talent for killing is a God-given gift, is also a delight, and a short-but-sweet appearance by a then-unknown Vin Diesel helps remind the viewer just how quickly things can go bad.

Tom Sizemore backs up Hanks to help blend the old with the new, and the criminally-underrated actor, Giovanni Ribisi rounds out the cast as the tragic and sensitive medic, Wade.

But, besides Hanks, the movie is almost stolen by Jeremy Davies as Corporal Upham, a young interpreter with just enough basic training to get by, woefully ill-prepared for the real war.

Upham stands in for the audience, viewing the squad as an outsider, asking questions we would ask. His quiet, almost-nervous demeanour is the opposite of most of the squad’s outspoken characters, however; by the end of the film, Upham is forever changed.

Earlier in the movie, Upham is the lone voice of reason against executing the squad’s German prisoner, nicknamed ‘Steamboat Willie’. Yet by the end of the film, after being paralysed with fear and watching as Willie returns to gun down Miller, Upham is the one who actually executes Willie, finally understanding the true horrors of war.

Each of the movie’s actors play off one another throughout the story, creating a true brotherhood on film, one that mirrors the deep relationships of those who actually served in not only World War Two, but all of history’s armed conflicts.

Saving Private Ryan definitely has a lot of loud, bombastic action. It’s one of the best things about the movie, for sure. But it also isn’t afraid to slow things down a bit and focus on the slower, quieter moments.

The dog tag scene brings to light the callous, somewhat-jaded attitudes forced upon combat soldiers as Miller’s men manage to jovially crack wise about the unseen demise of several faceless names. It’s only when Wade, who, as a medic has seen even more death than any of his colleagues, reminds them exactly what they’re doing, in front of a returning regiment, no less.

The acronym F.U.B.A.R. floats through the movie, eluding Upham as the others refuse to explain it to him. But finally, before the climactic battle of the film, Mellish explains its meaning. It’s a wonderful character moment for Upham as he realises that by being clued in on F.U.B.A.R., he’s been accepted by the squad as a true member, and by proxy – a brother.

Although, I believe the best of the movie’s ‘quiet moments’ comes from the titular Private Ryan, himself.

In the mid-to-late nineties, Matt Damon was everywhere. With movies like Courage Under Fire, Good Will Hunting and The Rainmaker, he quickly became a star. Saving Private Ryan added to his appeal, and the scene in which he tells Miller of his last time together with his now-dead brothers, only increased Damon’s reputation as one of Hollywood’s next big things.

If the opening scenes of this movie are considered to be the greatest depiction of war ever captured on film, then the finale of Saving Private Ryan must surely rank a close second.

As Miller and his men, having now found Ryan, combine their forces with a regiment of paratroopers determined to save a key, tactical bridge at Ramelle from an incoming German assault, the film shifts into a ‘calm before the storm’ motif, reminiscent of the classic film, Zulu.

As Miller and his men are again faced with an unsettling predicament, staring down the (literal) barrels of their approaching enemies, the team we’ve come to love puts their ingenuity to the test. These ‘preparation’ scenes help showcase Miller as a free-thinker, while his men (especially Jackson the sniper and his now-iconic hand signals) are given ample opportunity to express their thoughts on how best to avoid the slaughter. The ‘sticky-bomb’ creation is one particular highlight.

The Ramelle skirmish is filmed mostly from Upham’s point of view, scrambling from position-to-position with his role of ‘Johnny on the spot with the ammo’, trying desperately to serve his brothers while battling his own (soon to be) crippling fear.

The sense of dread we’ve had for our beloved squad is realised with full force in these scenes, as Jackson, Horvath and Mellish (in a particularly brutal and disturbing moment) are all killed.

Miller is also cut down but manages to hold his nerve, firing his pistol at an approaching tank with nothing but hope. This epitomises the character of Miller, and Hanks’ subtle acting in this moment is again a feature of his performance.

When the Allied reinforcements arrive to destroy the tank and help ‘save the day’, it’s a bittersweet moment of celebration for the viewer. Yes, the mission has been a success. Ryan has been found and will return home to his mother, and the ‘good guys’ are on their way to winning the war.

But at what cost?

Only Upham and Reiben are left alive by the end of the film, as even the seemingly-immortal Captain Miller succumbs to his wounds, but not before urging a distraught Ryan to ‘Earn this…”

This final message of Miller’s seems to be directed at not only Ryan, but all of us, who have lived plentiful lives thanks to the sacrifices of those who have fought to defend our freedoms. It’s Spielberg’s way of reminding his audience that nothing in life should be taken for granted, as it’s come to us thanks to the efforts of men like (the albeit fictional) Miller and thousands of other brave men and women just like him.

It’s at this point we return to the ‘present’ to learn the veteran in the cemetery was never Miller, but rather an aged James Ryan. His need for assurance from his wife that he’s ‘lived a good life’ as a ‘good man’ pulls at the heart strings. We know that for as rich a life he has led to this point, he is still haunted by his time in the war and the sacrifices made by Miller and his men.

As the movie fades out over a shot of the American Flag, it seems to ask the audience if they too, have earned all that they have.

Saving Private Ryan has definitely stood the test of time in the twenty years since its release. It remains one of Spielberg’s best films, and one of Hollywood’s all-time greatest war films. It more than deserves the continuing high praise from not only near-40-year-old film buffs like me, but audiences and critics alike, all over the globe.

It didn’t win Best Picture? Why not? What other movie could have possibly stolen the Oscar away from…?

Make sure you grab an Unfunny Nerd Tangent shirt! Escape the war, then head on home to Mon Milfma!