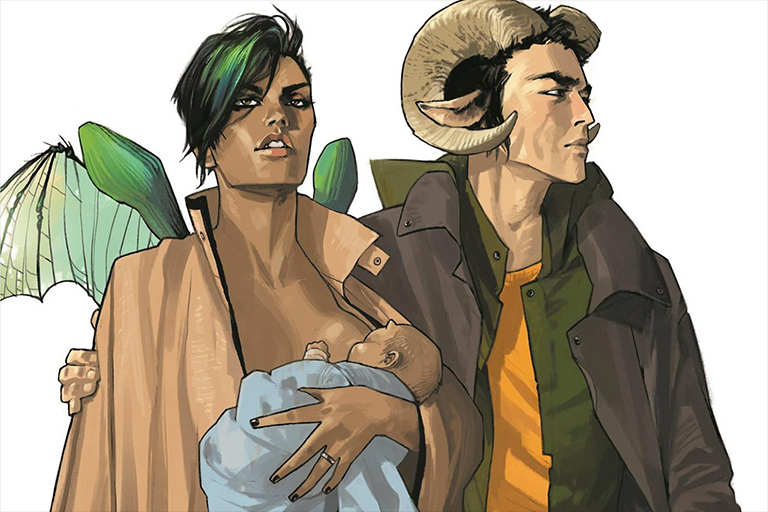 Hey nerds, are you looking for your next obsession, something on the level of Game of Thrones, Harry Potter, or even Star Wars? Pause the Netflix, head to your local comic-book shop and pick up Saga. This epic sci-fi fantasy from writer Brian K. Vaughn and artist Fiona Staples has everything — sex, drugs, war, weird aliens, more sex, friendship, betrayal, rocketships, even more sex, cool weapons, magic, talking animals, gut-wrenching death and (as DATES viewers know) #robotdicks.

Best of all, it manages to make parenting look downright badass. That’s why our unlikely space team of killers-turned-dads has binged all 54 issues to bring you a light-on-spoilers introduction with everything you need to know about the Saga universe. From there, we take a deep look at each of the characters as we cast our dream Saga TV series. And finally, (here’s the SPOILER WARNING!) we cry it out as we discuss the story thus far and the devastating latest issue as the series goes on a yearlong hiatus. So pop a tab of fadeaway, strap on your crash helm and hurl yourself into a timesuck as we blast off on our first-ever episode dedicated solely to a comic book.

Is that bantha milk or ROBOT BLOOD on the Unfunny Nerd Tangent shirt? If you’ve got The Will, Mon Milfma‘s got the legs.