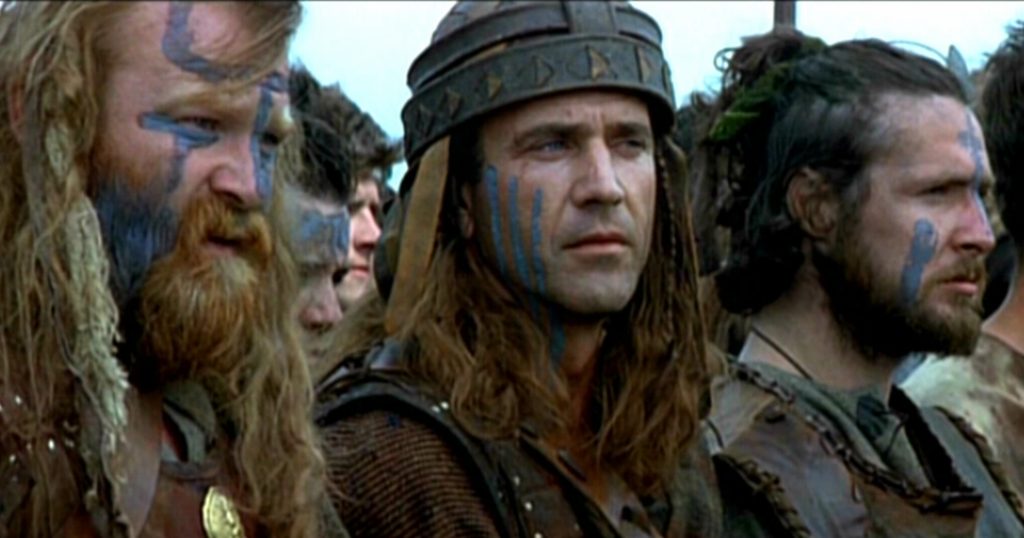 Historically-inaccurate films don’t come much bigger than #24. But there’s a reason it still managed to win the Academy Award for Best Picture.

Don’t expect a great biopic. Instead, view it as a tragic love story, or an underdog rebellion saga, or possibly even the grittiest fairy tale you could ever imagine.

Also, if you can overlook the personal demons of its leading man, that’s probably a good idea as well.

Braveheart tells (a version of) the story of William Wallace, Scotland’s greatest hero.

As mentioned, if you’re looking for a factual account of Wallace’s life, this isn’t it. The movie even opens with a voiceover from Robert the Bruce (Angus MacFadyen) admitting that he’ll surely be called a liar for telling the story this way.

So, is this meant to be the ‘true’ story of what ‘really’ happened? Not quite. But it does reveal the intent was to tell an entertaining story. And for me, Braveheart is exactly that.

Mel Gibson certainly seems to hate the English. (Among others.)

In 2000, in what many would call a poor, Revolutionary War version of Braveheart, The Patriot showcased Gibson once again coming up against an almost-cartoonish level of evil Englishmen. His character in The Patriot even suffers a similar family tragedy that kick-starts him into action.

Well, this is where it all started.

Like all of Gibson’s characters, he plays William with a subtle, boyish cheekiness. Sprinkled throughout the film, these odd little moments of levity help the audience empathise and root for Wallace early on, as almost the entire first hour of the film is devoted to his character development.

The film’s initial love story between William and childhood-sweetheart, Murron (Catherine McCormack), runs parallel with, and in contrast to, several instances of cruelty by the occupying English forces, chief among them being the reinstatement of Prima Nocta.

While William is opposed to living with the tyrannical English, if it means he can (secretly) wed and start a family, he seems content to do so. But of course, with all tragedies, our hero’s life is turned upside down when Murron is executed by the English for daring to resist a soldier trying to rape her.

At this point, Gibson flicks a switch within William. For a while, his humanity disappears and he becomes a creature of pure vengeance. The way William haphazardly mows down a slew of English soldiers (and accidentally triggers a rebellion) is the act of a man with nothing to lose.

Even when he succeeds in slaughtering the local English magistrate (and killer of Murron), in the seconds immediately after, the look on his face is one of almost confusion, as though he never expected to avenge his lover or even survive the attempt.

But he did, and now he’s alone, without a clue as to what to do next.

Murron’s funeral mirrors that of William’s father (also killed by the English), and while he was unable to act as a boy, Murron’s death (and the forgiveness of her father) spurs William towards his destiny.

Nowadays, the movie would surely be criticised for ‘fridging’ Murron, but as a story, it works. At this stage in the film, we’ve already seen a number of heinous acts committed by the English, and heard the plans for many more. However, for William, Murron’s murder is simply the last straw.

Another element found in most of Gibson’s characters is an unbridled rage from otherwise-reasonable men. This movie is no exception. It is perhaps the quintessential charming-yet-quick-to-violence Gibson character of all.

I mentioned back in my Frequency article that I always wanted to see Jim Caviezel as Batman. Well, back in the day, Mel Gibson was my pick for Wolverine, back before Hugh Jackman came along and made the role his own. Braveheart is the reason. A sensitive man, quick to anger and extremely proficient in the art of killing, who longs for a peaceful life with the woman he loves.

Gibson and his ‘necessarily violent’ depiction of William Wallace bleeds into the movie’s battle scenes. I think they may have been the first all-out warfare scenes (of their kind) that I ever saw in a film; violent, matter-of-fact, gory, jarring and slightly disturbing all at the same time.

Although, never are they ever really glorified or shown to be ‘honourable. There is zero mercy shown between combatants, and put simply, the fighting is nothing more than a means to an end.

The close up shots and sometimes lack of spatial awareness really works to immerse us in a semi-realistic representation of a 14th century skirmish.

The film’s primary villain, King Edward I or ‘Longshanks’, is portrayed as nothing short of a tyrant. Cruel and supercilious, the king is played by the legendary Patrick McGoohan with an air of Shakespearean wickedness. His distaste for his (clearly homosexual) son adds another despicable layer to his character and gives the viewer even more reason to support William and his campaign against the English.

Much of Braveheart’s charm stems from its secondary characters. Hamish (Brendan Gleeson) provides William with a ‘Little John’ type best friend, while Stephen the Irish Madman (David O’Hara) brings several much-needed comedic moments to a film that threatens to become a little too grim and gritty at times.

Robert the Bruce is also a complex character in this movie. Torn between his loyalty to his country and keeping the ‘peace’ with Longshanks, Robert is a tragic figure. His several changes of allegiance and eventual ascension to Scotland’s throne play throughout the film to give Robert a nice little redemption arc.

Sophie Marceau as Queen Isabella adds even more sadness into the mix. But also a sense of triumph by the end. Trapped in a loveless marriage of convenience to the Prince of England, her disgust with Longshanks and his actions comes to a head when she reveals to him the ultimate ‘bad news’, destroying his bloodline and legacy thanks to a secret romance with William.

Again, ignore the historical details and enjoy Marceau’s performance for what it is – an excellent subplot that works to build several character arcs and leads to a satisfying conclusion.

Everyone loves an underdog story. A tragic one, even more, and that is why I believe Braveheart (like Rocky before it) won the Oscar in 1996. William’s refusal to beg for mercy during his torturous execution, only to have the once-jeering peasants do so on his behalf, tugs at our emotions. And when his eventual death inspires Robert and the remaining Scots to win their freedom, the bittersweet ending leaves its mark in the memories and hearts of its audience.

Yes, Braveheart is far from perfect. But the story, the acting and characters, its haunting score and excellent direction by Gibson, keep me coming back for more, even after all these years.

Although, I am also a sucker for kilts. So maybe that’s the reason.

Rating: 4 out of 5 painted blue faces.

Favourite Moment:  The iconic speech and the battle that follows.

And remember to grab an Unfunny Nerd Tangent shirt! They make take our lives, but they’ll never take… Mon Milfma!