Hello and… Welcome to Earth! Since it’s the 4th of July, of course we gathered together one American, one Canadian and one Australian to sit down and talk about the 1996 blockbuster: Independence Day.

Through the magic of international time-zones and Morse code, we each setup a city-sized spacecraft of our own to dissect and analyse this mammoth movie that not only made Will Smith a genuine, big-time action-hero, but gave us the phenomenon forever known as –  PEAK GOLDBLUM.

24 years later, ID4 is still regarded as one of the best of its genre, and we endeavored to learn why, while one of us finally learned the actual name of one of its more prominent characters. Constance? Really? 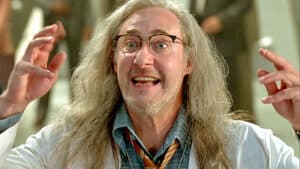 Also, is that Data from Star Trek? (Spoilers, it is.)

You might not be allowed into NASA if you marry a stripper, but you will be approved immediately if you bring Mon Milfma! Kick the tires and light the fires with an Unfunny Nerd Tangent shirt!