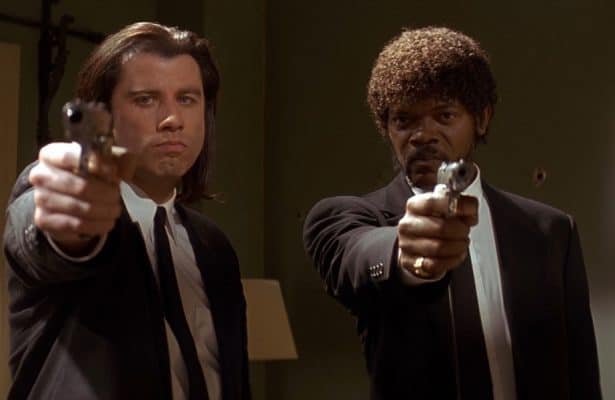 I’m sorry, did I break your concentration?

Because if you haven’t seen #10, I don’t what to tell you. You’re missing out.

It’s the movie that forever changed filmmaking and produced a thousand wannabe-replicas. It also brought us one of the most unconventional directors to have ever lived, launched multiple careers and resurrected a superstar.

Every now and then, one stands out from the cookie-cutter, clichéd, paint-by-numbers Hollywood system and forces the movie-going public to stand up and take notice.

The Godfather led the way into the grim-and-gritty crime noir movement of the seventies. Jaws created the template for the summer blockbuster. The Exorcist frightened people in a way they never knew they could be and Star Wars showed a generation of future directors what was truly possible.

In a similar fashion, Pulp Fiction and Quentin Tarantino brought the world of independent filmmaking into the mainstream. Budding directors like Spike Jonze, Richard Linklater and the patron saint of Unfunny Nerd Tangent, Kevin Smith, were all given huge sideways / backdoor profile boosts and greater career opportunities due to the success of Tarantino.

Pulp Fiction is what made Tarantino a household name, and after almost twenty-five years, I still believe it is not only his best film, but obviously one of my Top 10 favourites of all time.

Crime dramas were nothing new in 1994, but Tarantino injects such a sense of style into every aspect of his movie, most of it lifted from several hard-boiled pulp magazines and trashy novels from the fifties, that it’s impossible to resist watching and re-watching this film over and over again.

Tarantino’s now-signature pop-culture references and snappy dialogue (which, in 1994, often had the teenage me reaching for the dictionary) elevates Pulp Fiction from a relatively straight-forward story about the lives of various Los Angeles criminals into a stylised and almost-romantic, postmodern fable.

The fact that we aren’t spoon-fed the story as one linear narrative, but rather, a series of oddly-connected ‘episodes’ that cross over and interact with one another through a deconstructed time-line, is easily this movie’s biggest selling point. Each episode has its own unique story, yet remains part of the overall plot to paint an interesting picture and keep us wanting more.

Tim Roth and Amanda Plummer as Pumpkin and Honey Bunny, respectively, planning the robbery of the very diner they’re sitting in, is a terrifically-gripping introduction to the film. Watching their demeanour change from a loving, sickly-sweet couple to an uproarious and threatening pair of armed criminals is spectacular to watch. Particularly Plummer, whose shy, timid performance in The Fisher King is wiped from everyone’s memory three seconds into her explosive tirade.

I’ve already mentioned how Pulp Fiction is the movie that catapulted Tarantino to stardom, but the same can be said about Samuel L. Jackson. While Jackson had been a steadily-working actor for years prior to this film, make no mistake, it was his appearance as Jules, the conflicted, Bible-passage-spewing hit-man that made him an Icon.

As well as launching Tarantino and boosting Jackson into the ‘Big Time’, this movie also resurrected the career of John Travolta. In the seventies and early eighties, Travolta was a huge Hollywood star with films like Saturday Night Fever and Grease under his belt. But, the roles soon dried up and it seemed he was destined to vanish in sea of mediocrity, until the role of Vincent Vega (Jules’ partner-in-crime) made him a sought-after household name once more.

As a partnership, Jules and Vincent is cinematic gold. In metaphorical terms, Jules is fire, while Vincent is ice. Jules is loud, angry and intense. Vincent is calm, relaxed and laid-back. Although, in the end, they swap destinies as Jules plans to retire to a life of peace, while Vincent perishes in a horribly-violently death.

It’s tough to find someone who isn’t a fan of the opening episode involving Jules’ now-legendary recital of Ezekiel 25:17 and his immortal line of, “Oh, I’m sorry, did I break your concentration?”

I love how the scene begins in a comedic fashion, yet slowly increases the tension towards its unsettling climax. What starts as a sitcom-esque discussion about the pros-and-cons of giving your employer’s wife a foot massage soon ends with a number of professionally-executed murders (no pun intended) and a possible intervention from God.

Uma Thurman was another beneficiary of this movie’s success. As Mia Wallace, wife to the fearsome gangster Marcellus Wallace (Ving Rhames), she oozes a refined sexuality, as well as a mysterious, intangible quality that keeps us wondering if she’s more than meets the eye. And Thurman’s ability to deliver Tarantino’s quirky dialogue even better than her male co-stars helps her shine in a genre where female roles are usually reduced to damsels-in-distress or provocative femme fatales.

Yes, Mia does eventually need rescuing after her overdose, and yes, she is somewhat presented as forbidden fruit for Vincent, but that’s part of the charm of Tarantino’s film. He takes what was once a stock-standard movie trope – a character like Mia Wallace – turns it on its head and makes it infinitely more interesting.

My favourite scene of the entire film is when Vincent escorts Mia to Jack Rabbit Slims, a retro bar and restaurant complete with Steve Buscemi cameo (possibly as Mr. Pink from Reservoir Dogs, laying low after the disastrous events of that film).

With Mia’s story about her failed television pilot, Fox Force Five (which was clearly the on-screen beginnings of Kill Bill), the five-dollar-shake, the undeniable chemistry between Mia and Vincent and of course, the dance-off, everything about this scene screams Tarantino as well as being highly entertaining.

The Gold Watch episode is perhaps the film at its most peculiar. Firstly, we see ex-soldier, Captain Koon (Christopher Walken) return a watch to a young boy (after explaining its rather odd origins). This scene is so memorable, it has become the basis of a million (bad) Walken impressions ever since.

We are then introduced to the adult and aptly-named boxer, Butch (Bruce Willis) after failing to take a dive in his match and therefore procuring the wrath of the aforementioned Marcellus Wallace.

Willis is wonderful as Butch, a man desperately trying to escape retribution from Wallace, who finds himself caught in troubling situation after troubling situation when his girlfriend, Fabienne (Maria de Medeiros) forgets to pack his father’s precious watch.

This episode adds one tense moment after another until both Butch and Wallace find themselves trapped in the clutches of Zed (Peter Greene) and his now-infamous ‘gimp’. Nowadays, seeing scenes like those depicted in The Gold Watch are nothing new, especially in a Tarantino film. But back in 1994, those disturbing moments were so confronting, they succeeded in leaving audiences wanting more. As Butch manages to defeat his oppressors, make peace with Wallace (who now has a new enemy to torture) and ride off into the sunset, we cheer him on in a genuinely-satisfying movie moment.

The fact that the movie ends by swinging back to Jules and Vincent and the aftermath of the earlier professional execution, rounds out Pulp Fiction perfectly.

After an accident with their hostage, Marvin (Phil Lamarr) and the subsequent clean-up thanks to the mysterious Mr. Wolfe (Harvey Keitel), our favourite hit-men find themselves in the very same diner that Pumpkin and Honey Bunny are planning to hold up.

As Jules explains his desire to leave behind his life of crime, his words act as a warning for both Pumpkin and Honey Bunny. I love that by telling them his story and his plans for the future, Jules may have just accidentally set them on a different path, one free of crime and violence.

It’s obvious by now that I enjoy Tarantino’s use of dialogue and character development in this movie, but another reason I love Pulp Fiction, is the use of two re-occurring motifs that flutter through the various stories like duplicitous omens.

Firstly, the mysterious briefcase, now forever linked with this movie. It’s a bizarre, possibly supernatural plot-device that draws us in, even though its contents are never revealed. Fan theories have ranged between everything from the diamonds from Reservoir Dogs to the Lincoln Letter from The Hateful 8 to very soul of Marcellus Wallace.

Tarantino has spoken many times about how he, himself has no definitive answer as to the contents of the briefcase, insisting that it’s merely a ‘MacGuffin’ – an item often used in films to simply move the plot along.

The combination to open the briefcase being 666, the orange glow that emanates whenever anyone looks inside (now consistent with the Soul Stone from Avengers: Infinity War), as well as the lore behind the band-aid on Wallace’s neck, all of these famous fan theories work for me to make the briefcase a fascinating addition to the film.

Tarantino’s apparent obsession with Vincent and the bathroom is the other motif that regularly appears.

Mia overdoses on heroin found in Vincent’s coat (which she thinks is cocaine) while he is in the bathroom trying to talk himself out of a dangerous affair with her. The diner robbery and subsequent stand-off begins after Vincent heads into the bathroom, the one lone kid that tries to shoot Jules and Vincent during their moment of ‘divine intervention’ hides and later charges out of the bathroom, and lastly, Vincent is killed by Butch moments after exiting the bathroom during his stakeout of the boxer’s apartment.

There may be a higher meaning there somewhere from Tarantino, but for me, I just like how the bathroom is presented as a harbinger of doom throughout the movie. It adds another solid little touch to an already multi-dimensional film.

Tarantino does a wonderful job of blending the comedy with his violence. Thanks to his script, as audience members, we find ourselves laughing at situations or individuals we would otherwise find abhorrent. As I’ve mentioned, I think much of this is due in part to the eclectic dialogue, but I also think Tarantino helps take the edge off of the film’s heavier themes with his choice of music.

And how good his coffee is.

Pulp Fiction has no traditional score. Instead, it’s populated by a mixture of specifically-chosen songs, many of which are old-fashioned surf music or rock and roll tunes, formerly-considered to be obscure or ‘retro’.

The opening guitar riff of Misirlou that screams at us after Honey Bunny’s expletive-laden diatribe, the Chuck Berry dance song shared between Mia and Vincent at Jack Rabbit Slims as well as the contrast of hearing both Dusty Springfield and Urge Overkill (covering Neil Diamond) helps set this movie apart from many that would later try to copy its style. Pulp Fiction walks through the door opened by the use of Stealer’s Wheel in Reservoir Dogs and doesn’t take a backward step.

The legacy left behind by this movie is undeniable. Movies like 2 Days in the Valley, Snatch and Memento or even more of Tarantino’s other films may never have been made if not for the success of Pulp Fiction. For me personally, it easily makes the Top 10 of my 40 for 40, since I regularly re-watch it at least one or twice a year, noticing more and more little details every time. It’s endlessly rewarding and I still marvel at its overall quality in terms of its technical merits and Tarantino’s stylistic, creative choices.

So if you haven’t seen this movie in a while, I recommend you put aside some time and relive it all over again.

Rating: 5 out of 5 golden briefcases.

If you’re looking for even more Tarantino-Talk, check out Episode 3 of our show!