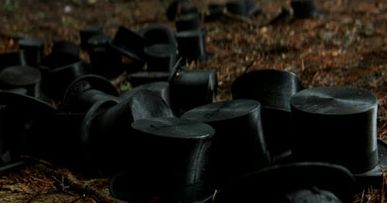 The coveted #13 spot goes to an underrated modern-day classic.

A director on the cusp of his prime, as well as two outstanding lead actors, both more famous for Hollywood blockbusters than introverted dramas, and a winding plot that still divides audiences with its revelations.

All the pieces of the puzzle come together in more ways than one to provide the 40 for 40 with an entry that’s simply… magic.

I love a mystery. A really good, winding plot, with twists and turns, characters that are more than meets the eye, and an overall narrative that forces you to think.

The Prestige is that and more. Much more.

The opening line of the film is the very-meta, “Are you watching closely?”, and it’s the perfect question for a movie like this. Almost like no other, this film embodies the term ‘nothing is as it seems’ in nearly every aspect.

In 2006, director, Christopher Nolan was hot off the heels of revamping the Batman franchise with Batman Begins, after already astounding audiences with his year 2000 sleeper hit, Memento.

Keep in mind, this was a Nolan who had yet to give us what many consider to be the quintessential ‘caped crusader’ movie with The Dark Knight, a Nolan who’d yet to leave us puzzled by Inception, mystified by Interstellar or break our hearts with Dunkirk.

But like the best kind of magician, Nolan’s immense talent was there for us to witness from the beginning. Even now, we can look back at his earlier work and see why he has grown to become one of the greatest directors working in Hollywood today.

With The Prestige, Nolan brings to life the novel by Christopher Priest as a modern-day mystery-thriller. He employs his almost-trademark, non-linear storytelling devices, giving us a crucial element of the film up front; like a pile of discarded top hats, only to reveal their utter importance later in the story.

We get layers upon layers of storytelling. Flashbacks within flashbacks, slowly revealing the hostilities between our lead characters, former colleagues-turned-competing magicians, Borden (Christian Bale) and Angier (Hugh Jackman), who, as the story progresses, become much more than mere rivals.

Having the story take place in the late 1890s helps add a secondary layer of intrigue. At this time, many ideas once thought of as fantasy or magic, such as readily-available domestic electricity, were becoming real. This change in society mirrors what’s also happening to the characters, Angier in particular, as he seemingly struggles to find his place in an ever-evolving world.

The Prestige’s incredibly-well-written and adapted screenplay by Nolan and brother, Jonathan, makes sure we understand that Angier’s desire to best Borden in every way imaginable has been an underlying character motivation from the beginning. The death of his wife, Julia (Piper Perabo) is merely the catalyst that unleashes his borderline psychotic obsession.

The Angier / Borden rivalry mirrors the historical one of Nikola Tesla and Thomas Edison. It’s a story this movie only hints at with mentions here and there, but it’s enough to keep it in our subconscious as the film plays out.

I’m a huge fan of this movie’s cast. I loved Christian Bale as Batman, and of course, Hugh Jackman left his mark on the cinematic world with his multiple portrayals of everyone’s favourite claw-wielding mutant, Wolverine. So having them both in the same movie was always going to draw me in.

But thanks to Nolan and his grounded approach to filmmaking, The Prestige gave both Bale and Jackman a chance to show their true acting talents at a time when they were both perilously close to being pigeonholed as ‘superhero movie stars’.

Both men give highly-underrated performances in this movie. Triple-threat Jackman is perfect as the natural showman, Angier. He makes us feel his grief, but also gives an insight into his darker, vindictive nature when it becomes obvious he lacks a ‘natural’ talent for actual magic tricks.

Bale as Borden is excellent as the driven performer, willing to sacrifice for his art, but frustrated with his lack of natural showmanship. His darker undertones and somewhat manic moodiness also lends an air of mystery to the entire film.

Borden’s Transported Man illusion takes centre stage for the second half of the film. Angier’s puzzlement over the technique behind it and his desperation to steal it (and thus, everything) from Borden, warps his already-unstable mind even further. The plot point revolving around this magic trick works wonders to again showcase Bale as the proud innovator, and Angier as an envious conspirator.

And of course, as we learn, both actors are playing multiple parts, secretly and subtly playing with the audience the whole time.

The movie also pulls a great double-turn with its leading men. Initially we’re led to believe that Angier is the hero, battling to understand the possibly-nefarious Borden, yet by the end of the film, the roles have reversed and we start to cheer for Borden in his quest to defeat the now-villainous Angier.

Nolan loves his supporting casts, and The Prestige delivers once more. David Bowie was always a great actor whenever he decided to take on a role. We all remember his turn as Jareth the Goblin King in Labyrinth. But here, as the eccentric inventor, Nikola Tesla, he helps elevate the movie to another level.

A major section of the plot revolves around Tesla and his work, and his innocuous machine is the perfect red herring. As Angier seeks answers, we are happily led down a rabbit hole to believe that Borden has used a similar machine built by Tesla, when in fact, just like most magic tricks, the reveal is often so simple, the audience doesn’t want to believe it.

The fact that Borden surreptitiously sends Angier off to find Tesla on what becomes a wild goose chase becomes the film’s greatest misdirect, grabbing our attention like the prettiest of assistants and blinding us to the truth that’s been under our noses the whole time.

Yes, Borden has a Tesla machine zapping away during his act – but it’s nothing more than misdirect. Just like a lot of this brilliant movie.

Andy Serkis has a nice little appearance in the movie as Tesla’s cat-loving assistant, Scarlett Johansson does her role justice as the ultimate magician’s assistant, caught up in the Borden / Angier feud on multiple fronts, and the legendary (and Nolan mainstay) Michael Caine is brilliant as Cutter, the wise older performer looking to pass on his knowledge to a new generation of illusionists.

However, the standout among the supporting cast is easily Rebecca Hall as Sarah, Borden’s slowly-unraveling wife. Her performance is excellent and I’m surprised Hall hasn’t yet become a bigger Hollywood star. The way she exhibits the signs of being overwhelmed by her husband’s secrets (and possibly learning the shocking truth) before succumbing to depression and ultimately suicide, is terrifically done. Sarah’s fate also sets up yet another dark parallel between Borden and Angier, mirroring Angier’s earlier tragedy.

I love this movie for the reasons already stated, but obviously, one of the major factors of the film is its mind-blowing twists. Firstly, when Angier reveals himself to be alive, and someone other than his true self, we can’t believe it. But then…

We discover that Angier’s eventual show business accolades come with a grisly cost. When we learn the truth behind his trick, that his machine does not transport matter, but rather replicates it, which means one of the two Angier’s must drown each night, we don’t think the movie could surprise us anymore.

But we are wrong.

The biggest and best twist is, of course, the Borden reveal. The one that completely flips the script and pulls the rug out from under us, like only the greatest illusionists can.

Honestly, if you haven’t seen this movie, this is the time to stop reading.

The reveal that Borden is not one but two men, a set of identical twins, blew my mind when I first saw the movie. But what was even more impressive, is that the twist doesn’t completely come out of nowhere. It is perfectly set up and alluded to the whole time. We just weren’t looking for it.

When Borden explains the bullet catch to Sarah, she says, “Once you know, it’s obvious, really.” And she’s right. On repeat viewings, the twist is glaringly obvious. But that’s only because we now know the truth. It also doesn’t mean we should feel silly for not having spotted it.

Nolan and The Prestige teases us directly at several times. For example…

And the best of them all…

Intrigue. Mystery. A thought-provoking story with multi-dimensional and well-acted characters, with a fantastic set of twists that turn the entire story on its head; these are the reasons why I love this film.

It is brilliantly directed, with great cinematography, as well as a wonderful score that creates an eerie sense of dread that haunts the entire film and stays with us long after the credits roll, tempting us to watch it all over again.

So if you’re like me, the next time you feel like diving back into the world of The Prestige, it’s simple.

Rating: 5 out of 5 Tesla Machines.

No you’re not seeing double! Make sure you grab an Unfunny Nerd Tangent shirt! You won’t need magic with Mon Milfma at your side!