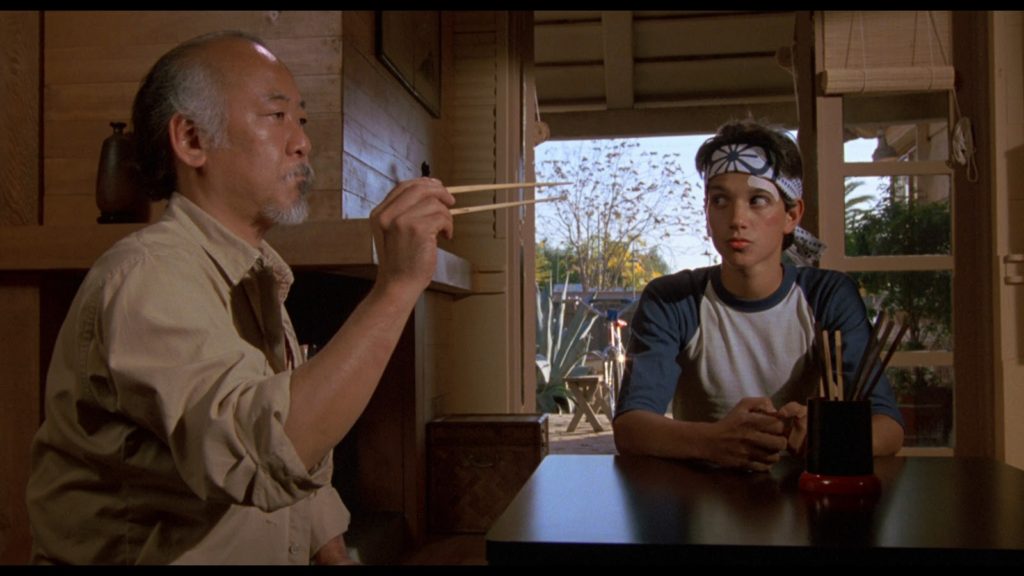 Sand the floor. Paint the fence.

As we move further into the 40 for 40, how could we NOT stop to follow the teachings of one of the greatest mentor characters committed to film?

A movie that set the standard for many underdog stories to come, helmed by the man responsible for the greatest of them all. 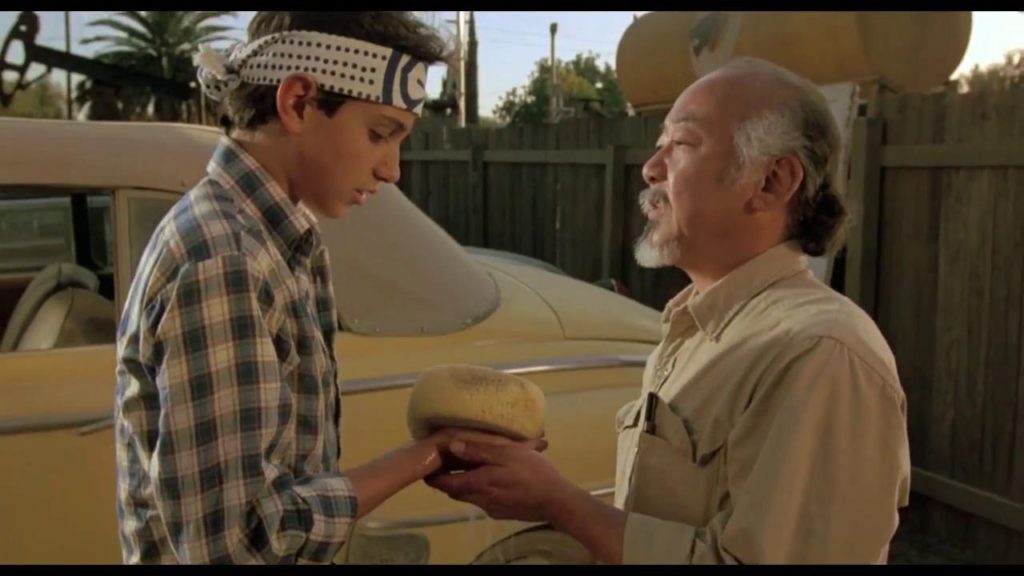 If nothing else, the late director, John G. Avildsen knew how to tell an underdog story. In 1976, he took a script and a character from an unknown young actor and not only created one of the most beloved movies of all time, but helped it to win some of the most important awards in Hollywood.

The actor was Sylvester Stallone, the movie was Rocky, and the awards were the Oscars for both Best Picture and Best Director for Avildsen, himself.

After Rocky hit it big, Stallone took over the franchise, yet in 1984, Avildsen delivered another heart-warming underdog tale, this time aimed at younger audiences.

The Kar-Rocky Kid, if you will.

Everyone knows the story. Daniel Larusso (Ralph Macchio) moves to Reseda, California with his Laverne DeFazio-type mother and soon finds himself at odds with karate champion Johnny Lawrence (William Zabka) and his Cobra Kai buddies.

First of all, let’s address this trendy little idea that Daniel is actually the villain of The Karate Kid. Yes, Neil Patrick Harris and How I Met Your Mother turned this comedic point-of-view into a hilarious scene on that show, inspiring a bunch of YouTube copycats and other assorted ‘edgy’ opinions.

I’m sorry, but anyone sticking to the ‘Daniel is the villain / Johnny is the real hero’ spiel, either hasn’t watched the movie recently, or is one of those too-cool-for-school hipster posers looking for attention.

When Johnny arrives on the beach, Ali ‘with-an-i’ (Elisabeth Shue) wants nothing to do with him. It’s only after Johnny refuses to leave her be that Daniel gets involved. And yes, Daniel gets a somewhat-sucker-punch in there, but only after Johnny pushes him over, instigates the confrontation and drops Daniel with a spin-kick to the stomach.

Daniel Larusso is an interesting character in his own right, however. He’s not your usual underdog goody-two-shoes. He’s stubborn, hot-headed and quick-to-anger, as seen when he explodes with rage during yet another incident with Cobra Kai on the soccer field.

Ralph Macchio was never known for his stellar acting credentials, despite his heartbreaking turn as Johnny Cade in The Outsiders, a film (and novel) that taught an entire generation to ‘Stay Gold’.

But as Daniel, his teen angst is entirely believable, and something I could relate to as a kid, myself. No dad, a new school in a new town; all familiar stuff from parts of my own childhood, perhaps one of the reasons why this movie makes the 40 for 40 list.

Daniel’s anguish early in the film helps establish his character and also sets up two story arcs and some seriously-overlooked themes; all of which revolve around everyone’s favourite maintenance man and Banzai tree connoisseur: Mr. Miyagi (Pat Morita).

If Avildsen’s greatest talent was crafting underdog stories, then his second greatest had to be showcasing mentor characters. Miyagi in this movie, and of course, Mickey from the Rocky series, a man who, when he tells you to ‘get up’, you goddamn well get… up.

On closer inspection though, Mr. Miyagi is not only the guide Daniel needs to teach him karate and be rid of his bully issues – he’s the key to the entire movie. The film’s greatest scenes and even its richest themes centre around Miyagi, even though he’s initially introduced as some kind of off-putting hermit, perhaps a red-herring throwback to the shameful ‘Yellow Peril’ trope of years past.

I do still wonder about Pat Morita’s decision to play Miyagi speaking with broken English. Maybe he and Avildsen thought 1980s audiences weren’t ready to accept sage-like, Eastern advice from Miyagi if he was simply Arnold from Happy Days or Captain Sam Pak from M*A*S*H*. Who knows? But, whatever the reason, it works.

Because Miyagi is a man of few words, it makes us listen all the more carefully. The words he does say are never wasted, and every single one is important.

Miyagi is not only the most-endearing character in the movie, he’s also the most layered. As the great philosopher, Shrek once said; like an onion, the more you peel away, the more you find.

When Miyagi fixes Daniel’s smashed bike, at first it’s just a tender little moment; a kind gesture from a sweet old man. But watching on repeat viewings, that incident, along with almost every other involving Miyagi, is laced with heartbreak, and it really is no fluke that Morita was nominated for Best Supporting Actor for his performance.

When we get to the big reveal about Miyagi’s past, it turns many aspects of the movie on its head. What begins as a comedic scene with an inebriated war-hero, quickly turns mournful, and after putting his sensei to bed, Daniel discovers the truth about the loss of Miyagi’s wife and infant child.

Now if we look back at Miyagi through this prism of grief, the depth to his character is obvious. Many moments can be viewed differently when you think of Miyagi’s loss. For instance, the karate training…

Yes, the way Miyagi trains Daniel is both funny and charming. While the muscle-memory technique comprised of waxing cars, sanding floors and painting fences and houses can be seen as a little far-fetched to older audiences, look at it this way… why is Miyagi’s house so rundown if he’s a maintenance man? Is it because he doesn’t care? Has he given up, still mourning his wife and child after decades?

Teaching Daniel gives him that surrogate son in place of his own, just as Miyagi becomes a father figure to Daniel after losing his dad. Looking at things this way, is it any wonder Miyagi gives Daniel a car on his eighteenth birthday, just as any loving father would?

Daniel fixing up Miyagi’s house can easily be seen as a metaphor for ‘fixing’ the broken, rundown Miyagi, himself. Even the Banzai trees could be an allegory for the Daniel/Miyagi dynamic. Together, they shape one another by clearing away the excess or ‘baggage’ to reveal the best version of themselves.

It’s this heartfelt bond between the characters that fuels the film’s training scenes, including the reveal when Daniel learns the truth behind Miyagi’s odd methods. As a kid, I totally believed it. Daniel’s reaction really sells the whole idea, so much so that even now as a (supposed) adult, it’s hard to nitpick.

The crane kick in particular is a wonderfully-emotional moment. The culmination of everything Daniel has learned from his teacher, delivered in an all-or-nothing climax, expertly foreshadowed on the beach.

On a more straightforward note, Mr. Miyagi has many more entertaining moments. The chopsticks fly-catching always elicits laughs, but serves double-duty as it also shows Daniel is a natural with fast reflexes.

And personally, watching Miyagi kick a Cobra Kai skeleton in the nuts is still amazing to me. Seeing how Miyagi is on a completely different level, karate-wise, imbues the viewer with a sense of triumph, as Johnny and his pals get their first (of many) comeuppances.

Speaking of Cobra Kai, Johnny and his goons are perfect in their roles as bullying thugs, albeit misguided teenagers swayed by the teachings of their sensei, John Kreese (Martin Kove). Kreese is the movie’s true villain. While Johnny ultimately sees the error in his ways, Kreese is well past the point of no return.

Obviously ‘sweep the leg’ has become synonymous with his character, and is now used to emphasise anyone intentionally acting in a nefarious fashion. But the reaction from Johnny and the others to seeing Kreese’s glee at Daniel’s injury begins their path to rejecting his ways. Unfortunately, it isn’t until the next movie that we get to witness Kreese’s karmic punishment.

The classic ‘broken windows’ scene from Part II was originally meant to conclude the first film, but had to be cut for time and was instead used as the opening to the sequel. It’s a great scene to watch, as Miyagi not only humiliates Kreese, but also causes his students to abandon him.

I really wish Johnny had turned up as an unlikely ally in the third movie against Kreese and Silver, but oh well.  We do have the amazing new show, Cobra Kai to carry on the legacy of The Karate Kid, a series that brings new light to Johnny and his past, including his longing for ‘the one that got away’, Ali.

Ali is also a very important character in the original film. She’s not only the inciting incident which sets Daniel and Johnny on their path of rivalry, she adds to Daniel’s character with a class-divide subplot.

When Daniel meets Ali’s parents, they seem genuinely confused when he mentions he’s from Reseda, as though their well-to-do daughter would never even consider a date with someone like Daniel. Worse still, when his mother’s car needs a jump start, you can almost feel Daniel’s shame permeate the screen.

Despite the potential divide, the romance between Daniel and Ali does seem genuine on-screen, even if she seems older than him.

Music is important to any film, and this one is no exception. Once again Avildsen calls upon his Rocky expertise and brings in Bill Conti, the man responsible for one of the most uplifting themes of all time.

Everyone remembers the Joe Esposito song, You’re the Best Around from the movie’s tournament montage, but the background score is equally as powerful. Subtle when it needs to be, inspiring and also sad at times, hinting at Miyagi’s past from the get-go with those haunting pan-pipes.

As a film that inspired many others, as well as remaining a long-term favourite for even the most jaded Gen-Xers, The Karate Kid certainly warrants its place in Hollywood history, as well as this list.

The sequels are hit-and-miss. Part II is entirely enjoyable and ups the stakes in every way imaginable, yet the third film is mostly forgettable, and the less said about the Jaden Smith version the better.

Thankfully, we do have the aforementioned Cobra Kai to continue the story for a whole new generation of fans who hopefully go back and learn where all this started, rewatching this movie over and over again.

Between waxing on and off, don’t forget to order an Unfunny Nerd Tangent shirt! Mon Milfma is the Best Around!