An all-time family classic. Often imitated but rarely duplicated, from the director who made us believe a man could fly, created the best buddy cop film of all time and helped Bill Murray remember the meaning of Christmas. 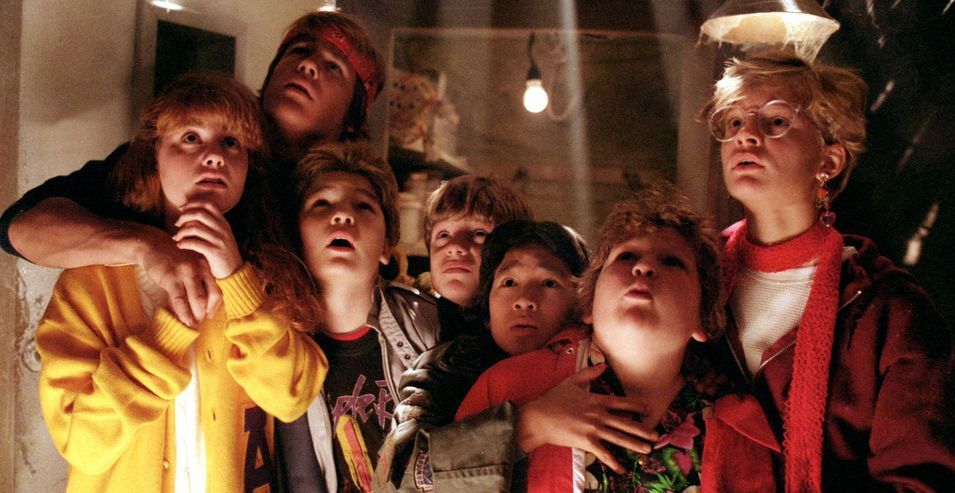 If you’re anything like me, and saw The Goonies as a child (I was seven), I’d wager that it stuck with you, as it has with me. I don’t know of a single person who saw this when they were a kid, in-or-around 1985, that doesn’t still like or even love this movie and its caboodle of colourful characters.

The 80s was a terrific time to be a kid, especially as far as entertainment was concerned. What are now considered staples of the Saturday Morning Cartoon cycle were in their infancy, but soon blossomed into the most powerful marketing tool a toy company could have ever hoped for. The 80s also ushered in a new era of family / kids movies, and The Goonies sits right up there with the best of them.

Following in the tradition of The Little Rascals and The Bad News Bears, came a movie inspired from the mind of Steven Spielberg, a filmmaker who had already established himself with instant classics like Jaws, Close Encounters of the Third Kind and Raiders of the Lost Ark.

Only a couple of years prior to The Goonies, Spielberg had struck cinematic gold with his family-friendly film, E.T. the Extra-Terrestrial. That story focused on one child as its lead. So it came as no surprise that Spielberg would continue his storytelling ways by incorporating an entire batch of kids.

He even got Cyndi Lauper for the soundtrack, which is still synonymous with her to this day.

Chris Columbus, who would later be the man responsible for getting the Harry Potter film series off and running, and by 1985 had also written another Spielberg production in Gremlins, would provide the screenplay for The Goonies. Yet, for a director, Spielberg decided upon Richard Donner, the visionary who had already created a sense of wonder with audiences almost a decade earlier with Superman: The Movie.

Like Spielberg, throughout his career, Donner has crafted a slew of all-time marvels. Films known all over the globe by audiences young and old alike. The aforementioned Superman, the horror masterpiece, The Omen, the entire Lethal Weapon Series, everyone’s Christmas favourite, Scrooged, and the cult classic, Ladyhawke.

In this movie, the quality of its writing and direction is on full display from the beginning. The chase sequence that starts the film is brilliant for two reasons. One, it’s a fast-paced, exciting opening that hooks its (mostly younger) viewers. And two, as the Fratellis tear through the Goon Docks, they pass by several of our characters to give us a snippet of their lives before the real story starts. This allows the movie time to introduce the brothers, Mikey and Brand, and when the other Goonies inevitably join them, we feel like we already know them.

Donner (through Columbus’ script) also doesn’t talk down to his audience. He realises that kids are smart and don’t need to have their narratives baby-fed to them. Treat them with respect and give them a well-told story, and they’ll follow along just fine. For instance, there are several examples within the film that upon viewing in today’s PC world seem somewhat inappropriate for what is labelled a ‘kids movie’. For instance, the opening scene begins with the apparent cell-block suicide (by hanging) of Jake Fratelli. Try getting that past today’s censors.

Other examples of ‘non-kid-friendly’ material in this film include:

But that’s what makes The Goonies so great.

It’s that unending loyalty that drives the focus of the plot as well. When we meet the Goonies, we learn it’s their last weekend together, as the rich country club has begun forcing foreclosure on the surrounding homes in order to redevelop the Goon Docks into a golf club resort. The kids know that once their parents sell up, that’s it. They’ll all move away and never seen each other again and the Goonies will be no more. Few things were as upsetting as a child than having a good friend (or you, yourself) move away, and this movie stabs you in the heart with that threat from the outset.

Figuratively and literally, our heroes are stuck in a rainy day, but it’s that desperation that inspires Mikey to delve into his father’s attic for clues on the whereabouts of the famous (or infamous) pirate, One-Eyed Willie and his legendary treasure.

While only Willie’s skeleton is ever seen, his presence is felt throughout the entire film. Especially when it comes to Mikey, who idolises and romanticises his legend. There’s even a hint of the supernatural at play towards the end when the dead pirate has one more trick up his decomposing sleeve to release his ship out onto the seas once more.

Mikey’s recollection of Willie’s doomed expedition (complete with fabled explorer, Chester Copperpot) is what kicks off the Goonies’ own adventure. As their journey continues, they soon find themselves entombed in a series of tunnels and catacombs, littered with hidden dangers and booby traps.

Again thanks to Donner, the underground sequences work incredibly well. The tight spaces, dim lighting and fragile surroundings of One-Eyed Willie’s vast tunnels give that claustrophobic feeling of danger as though at any moment, the Goonies could perish.

However, as good as the adventure is, there’s no doubt that the true heart of the movie lies with its charming characters.

Mikey, the de facto leader, brave and ambitious despite his obvious asthma, is the first to jump-start the adventure for the good of his family, his friends and the very Goon Docks itself.

Mouth is the perfect, sarcastic smart-ass of the group. He also becomes essential to the quest when his (originally played for laughs) ability to translate Spanish becomes vital not only to the plot, but for the very survival of the Goonies. He’s called ‘Mouth’ for a reason. It’s not just a nickname; it’s the essence and function of his character, as he literally at times ‘speaks’ for the group.

Data and his wannabe-Bond gadgets deliver some genuinely funny slapstick moments. Jonathan Ke Quan is best known to audiences as Short Round from Indiana Jones & the Temple of Doom, which keeps that constant reminder of those films in your mind as you watch what is essentially Raiders of the Lost Ark with children. Data’s gadgets are also used sparingly enough (with different degrees of success) to keep them from becoming an overly-convenient escape clause.

Mikey, Mouth and Data are all great, but if there’s one character people remember most, it’s Chunk. He’s the overweight, juvenile version of John Belushi, with a scared speechless routine that rivals Bert Lahr’s.

Almost everything Chunk says or does is hilarious, highlighted by my favourite scene in which he mistakenly confesses to the Fratellis about every awful thing he’s ever done.

Plus, who can forget the ‘Truffle Shuffle’?

But there’s a lot more to Chunk that just a buffoon. The character has heart. His relationship with the ‘monstrous’ Sloth is perhaps the most endearing part of the movie. After initially fearing Sloth while locked up with him, Chunk soon develops a deep friendship with the youngest Fratelli. The two create a terrific double-act, which also gives Chunk’s character a surprising amount of empathy.

I’m sure it’s no accident that Donner and Columbus allowed Chunk (who is himself ridiculed for his weight and appearance) to be the one who sees past Sloth’s ‘hideous’ facade to find the human being within. Together, Chunk and Sloth embody the old saying ‘Don’t Judge a Book by its Cover’ to the Nth degree. It’s a nice little lesson for the kids from the filmmakers, without pandering or overtly lecturing them in any way.

Adding to the group are Andy and Stef, the movie’s female representatives. They contrast one another so well, with Stef as the sarcastic-yet-sensible one, and Andy, the lovesick cheerleader pining for the Goonies’ inadvertent alpha-male, Brand.

Josh Brolin plays Brand as the older brother tasked with looking out for his smaller, weaker sibling, Mikey. At first, Brand acts beleaguered by the burden, but as the movie continues, we see how much being the protective older brother means to him, even after the kissing mix-up with Andy. The film also showcases several genuine brother-to-brother bonding moments, which is a nice touch, character-wise.

All in all, every member of the Goonies plays their part. Mikey is the optimistic one, pushing the gang further into adventure. Mouth is the Spanish translator. Data helps them overcome obstacles with (some of) his gadgets. Brand is the physical presence and substitute big brother to all the boys. Stef is the voice of reason, and even Andy gets her time to shine with the Bone Organ. And Chunk bridges the gaps between his long-time friends and Sloth to save the day from the film’s memorable villains.

Mama Fratelli and her boys, Jake and Francis, are set up as legitimately-intimidating and frightening criminals, which makes their bumbling comeuppance all the more satisfying. When Sloth and Chunk, sorry… Captain Chunk get their revenge (even evoking the Superman theme from Donner’s own movie), we cheer them on alongside the kids.

Like all good family films, this one of course has a happy ending, as the Goonies retrieve (just enough) of One-Eyed Willie’s treasure to save their beloved Goon Docks and live happily ever after.

However, after all these years, I still wonder if that’s the last we’ll ever see of them. In this day-and-age of remakes, reboots and continuations, we’ve seen the return of many childhood favourites. Rocky returned for one final bout in Rocky Balboa and remains a huge part of the new Creed series. Ash released the horrors of the Necronomicon once more in Ash Vs Evil Dead. Even Daniel LaRusso and Johnny Lawrence had to re-settle their score in the stellar Cobra Kai. Bill and Ted seem set to return, and we can’t go on without mentioning Luke, Han and Leia.

I guess we can be content that many of today’s writers and directors have been inspired by The Goonies. Super 8 and the brilliant Stranger Things owe almost everything to Richard Donner and this movie.

Hopefully though, in some fashion, the Goonies can make their way back onto screens and into our hearts. If they do, I for one, will be there to welcome them with open arms, because as we all know… Goonies never say die.