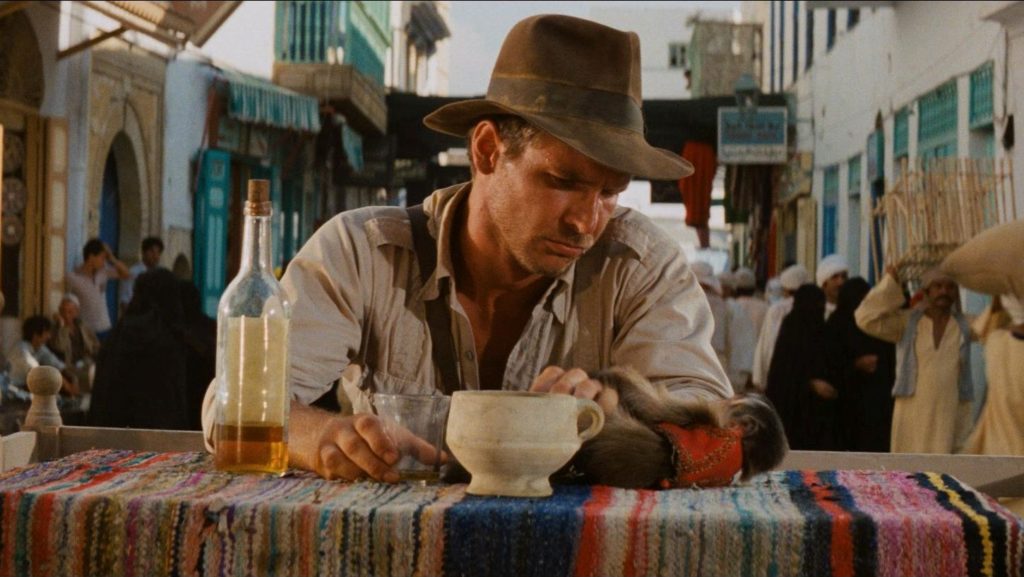 Hello and welcome to… well, you know how this works.

As I begin the slow descent of leaving my thirties behind and stumbling into my forties, I’ve decided to alleviate this potential mid-life crisis and look back on the films that made me who I am today.

By doing this, I’ll be reviewing my favourite 40 movies, all of which hold a special place in my heart, once a week, for 40 weeks. And after 40 films and 40 weeks, we’ll end with my biggest, baddest birthday so far. A 40 for 40, if you will. 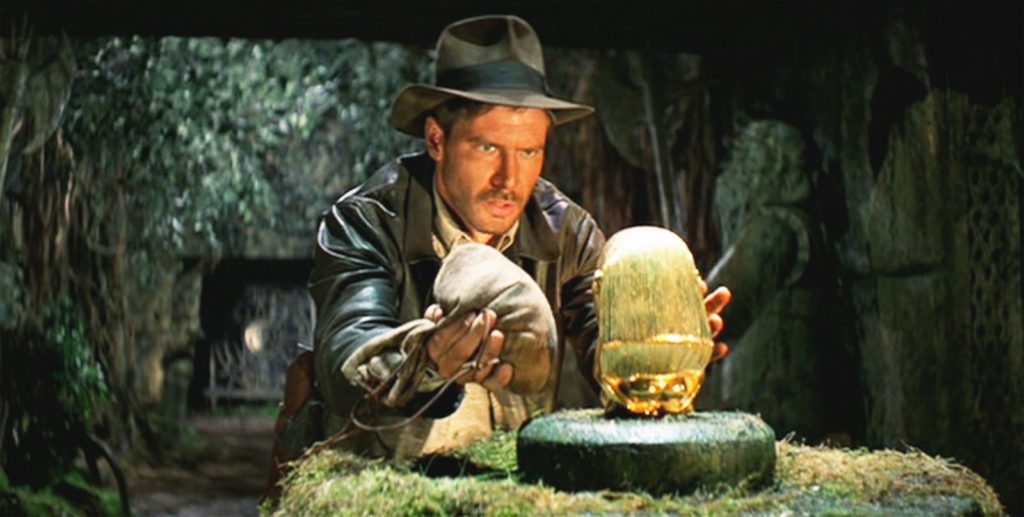 The first (and best) of the Indiana Jones movies. While The Last Crusade holds a special place in my heart, I’ve favoured the original film for this list, since it’s the one that introduced us to Dr. Henry Jones, Jr. in the first place.

The 1930’s adventurer, complete with now-trademark hat, whip and five o’clock shadow, oddly enough came about after Spielberg told his friend (George Lucas) about a desire to direct a Bond film, to which Lucas replied he had something even better in mind.

Indiana Jones is the perfect movie protagonist. He’s likeable, charming, capable, and above all else, flawed. His crippling fear of snakes and morally-indeterminate past with a young Marion is partnered with a lighthearted, roguish character, non unlike Ford’s earlier role of Han Solo. At the time, this came as a welcome relief to the stoic, all-brooding-all-the-time anti-heroes of the 70s from films like Dirty Harry, Death Wish and Taxi Driver. And unlike Han Solo, Ford seems to genuinely love his association with Jones, and even came back for the disastrous Kingdom of the Crystal Skull.

That movie may have been an idea better left alone, but thankfully we did end up with three fantastic adventure films, and this is where it all started.

Heading into the new decade, movie goers wanted fun, and Raiders certainly gave it to them in spades, decidedly digging in the right place. The film mixes treasure hunting with a Biblical, supernatural artefact to combine perfectly with the desperately-close to World War II setting, which is another subtle masterstroke.

I mean, how can you have better villains than the Nazis?

Gestapo Toht is a perfect rendition of a Peter Lorre-inspired psychopath while fellow adventurer Belloq has just the right amount of honour and charisma, that in another light, he could almost be the hero of his own movie.

Ford’s Indy is also backed up with a stunning array of supporting characters, including the aforementioned firebrand, Marion, played by Karen Allen, John Rhys-Davies as the worldly Sallah and the often understated Denholm Elliot as bookish intellectual, Marcus Brody.

Each supporting character aids the Indy character in its own way. Marion represents his past, Brody his present, while Sallah gives us a very real insight into the dangerous world of foreign treasure hunting in 1936. Again, all three are played with just the right amount of charm, guile and sincerity, serving their purpose without falling into stereotypes.

The action is incredible. Not the same as today’s overly-choreographed and CGI infested messes, not overblown with so-called snappy dialogue or hampered by oddly-close camera angles. Nope, it’s thrill-a-minute, non-stop fun. The opening with Indy plundering the golden idol, only to be chased by cinema’s most iconic boulder, the Cairo cat-and-mouse scenes, the battle in the shadow of the Flying-Wing and obviously the classic Indy brawls, are all perfectly done, a true testament to Spielberg’s classy directing.

And while in recent years the joke about exactly what effect Indy has on the story seems to indicate he is superfluous to the ultimate outcome, that particular theory seems to come from a place of good-natured fun as opposed to a serious thesis.

Think about it, the Nazis were digging in the wrong place. Indy found the Ark, which allowed the Nazis to take it and ultimately misuse it and destroy themselves.

And to me, bittersweet endings don’t get much better than watching the Ark finally locked away to be studied by ‘top men’.

Lastly, one of the biggest takeaways about this film is its legacy and the amount of films over the decades that have tried to replace it. The Mummy, National Treasure, and now even the new Tomb Raider, all have been or at one point were touted as the “New Indiana Jones” to varying degrees of success. But after many wannabes, Raiders of the Lost Ark remains in an archaeological class of its own (complete with lovesick admirers), continuing to be the bar against which all adventure films are measured.

Rating: 4 out of 5 of Marion’s shot glasses.

Favourite Moment: What else? An exhausted and belligerent Indy takes out his scimitar-wielding foe with a single, casual shot.

Next week:  #39 – “Yes, dudes and dudettes, major-league butt-kicking is back in town…”