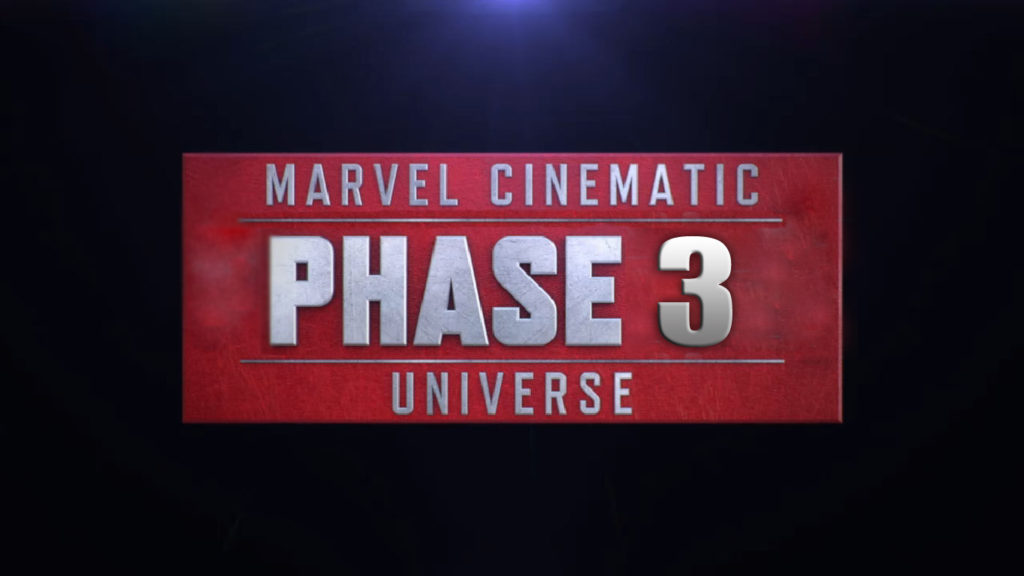 Countdown to Infinity: A Three-Part Retrospective on the MCU… so far – Part Three.

What if it doesn’t beat Black Panther’s opening weekend at the box office?

What if it sucks?

But fear not, True Believers, as we will see with this final entry into our look back into the MCU, Phase 3 has essentially perfected the formula and raised the stakes for Infinity War to be nothing short of a superhero masterpiece.

Civil War (aka The Avengers Part 3: Cap’s Adventure) continues to show the versatility of the Captain America character, which has more dimensions than we may have previously thought. While he and Iron Man clock in at the same run-time in overall presence, Chris Evans again gives the film a better performance than it deserves and helps elevate the material. I am not saying this film is anywhere near The Dark Knight in terms of surpassing the genre confines of a comic book movie, I just mean that without Evans’ commitment to the role, this movie would be down the list near Iron Man 2.  That being said, for all the visuals and effects, the film fails to hold up on repeated viewings. While it’s nice to get see Spider-Man show up as a surprise, this is little more than fan service (and it only downplays the hype for Spider-Man: Homecoming).

I fucking love this movie. As with Guardians, just when the MCU is beginning to get stale, they throw out an obscure origin story for a character no one outside of Comic Con has heard of, and the results are staggering. It’s not just that the film is a fun science fiction adventure film that takes us to the mystical corners of Asia; the movie leaves a mark on the audience simply for being so visually exciting. Not since Inception have I been as impressed with the technical achievements in not only creating wholly original worlds, but then literally turning them on their head. Despite the critical acclaim and box office draw, there is still no confirmed sequel… what gives Marvel?

Another masterwork. A film that is so much fun (and so much in sync with its predecessor) that it doesn’t even feel like a sequel. It feels like it literally just plays on from the ending of the first film.   Humour, heart, creative characters, unique worlds, awesome soundtrack, it’s all here. On top of that, the film successfully pulls off what most sequels fail at; it expands the background of the main character whilst not making him boring. Stallone shows up in a cameo, Mantis steals every scene and the underrated Michael Rooker turns Yondu from a one-note villain to a bad ass with a heart of gold. Kurt Russell is maybe the most likeable actor in history and it’s so good to see him have fun as the villain. Bring on Guardians 3 and don’t you dare change a thing. The writer, director, actors, cinematographer, editor, coffee boy, don’t change anything.

Best moment:  “He may have been your father, boy… but he wasn’t your daddy.” (LITERALLY TEARING UP.)

Spider-Man has such a sordid history. At one time, we were so Spidey-starved, we would take anything they gave us. Raimi’s films were good enough… (except for Spider-Man 3; that film fucking sucks) then they changed direction with Andrew Garfield, who will forever be known as the Timothy Dalton of Spider-Man. Not bad, not good… just odd, and at a weird time… the films did not work and it seemed like all is lost. Whether it was the positive feedback from Guardians or not, with Homecoming, Marvel did the right thing by bringing back the fun and the humour to Spider-Man.  Whilst I personally think the movie is overrated, to a degree, I admire that we did not have to endure another origin story, and I was happy to see more time spent with Peter doing his teenage thing.  Keaton is always reliable, and although Downey Jr. seems a bit bored, this is an easy way to spend two hours.

Best moment:  Keaton gives Spidey the dad talk (and reminds us that he should have won the Oscar for Birdman).

Again, not to sound like a broken record, but I am convinced that it was the success of Guardians that caused Thor: Ragnarok to be as good as it is. Not just the hyper-colour poster, pop culture ridden trailer and non-stop jokes, but its emphasis on FUN. Compared to the original Thor (which looks downright Shakespearean), Ragnarok is an absolute blast. This is not to say the film is camp and treats the source material as a joke, it’s just generally so colourful and silly, even Blanchett and Goldblum, as the bad guys, cannot help but ham it up. I have heard some complain that this film is for ‘normies’ aka non comic book fans who just want to go to the movies and have no interest in the bigger picture/expanded universe. That might be so, but it doesn’t make the film any less fun. The only real complaint is that Thor himself does take a back seat to the space ships, aliens, monsters, kooky villains and synthwave soundtrack. Still, it’s near impossible to watch this film without having a goofy smile on your face.

Best moment:  “We know each other!  He’s a friend from work!”

The amount of hype for this movie was so insane, that it almost made me want to not see it. Rather than see it as comic book film, the left-wing media and SJW’s on Twitter actually convinced themselves that this was the defining moment in cinematic history for black people. This madness got so out of control that when the film was released with a near perfect 97% on RT, various bloggers began attacking the few critics who stopped it from getting 100%… that’s right, critics were named and accused of racism because they did not praise a comic book movie.

Having said that, when you pull back the hysteria and see it for what it is (Batman/The Phantom set in Africa), this movie is a real treat.

Director Ryan Coogler, fresh off the fantastic Creed, has made a thoughtful movie that is as much about action as it is about family and honour. Focusing on conflicting views on isolationism and what is owed to the rest of the world, Black Panther gives us one of the best villains in the MCU with Killmonger and his vision of a powerful African nation shaping the world (for better or for worse). In contrast, T’Challa/Black Panther fights his own internal battle of how to be both a “good man” and a great king. It is a shame such a complex tale descends into CGI armies fighting each other, but then again, it is just a comic book movie, albeit an extremely ambitious one.

Will Avengers: Infinity War deliver? My gut feeling is that the film will be fine. It’s being directed by the Russos who have shown themselves to not only be competent directors, but they can handle large spanning stories with multiple subplots. My hope is that at least two characters have an actual arch. I don’t want it to be a giant cameo/fan service movie.

My take is it will likely focus more on Cap than anyone else, although Black Panther’s box office draw makes me think he will feature prominently. It will also be exciting to see Josh Brolin take on Thanos in more than just a 10 second teaser.

And finally, I’m predicting an 85% on RT and Captain America will die (sacrificing himself of course).