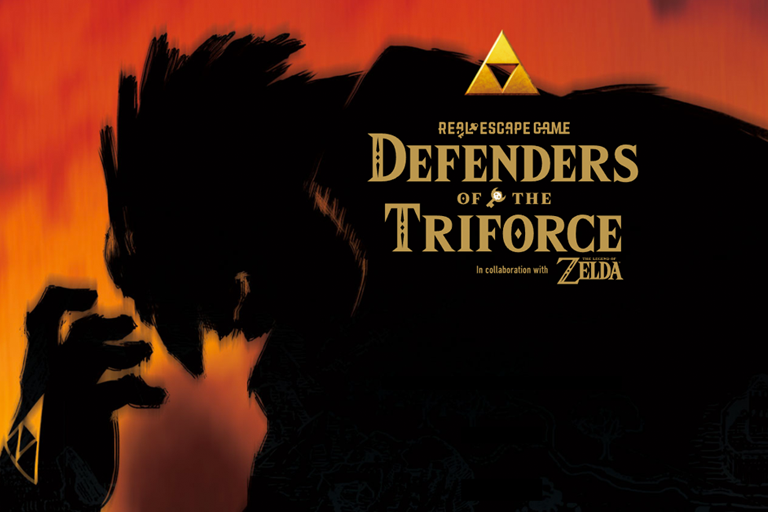 A Legend of Zelda-themed escape game is touring U.S. and Canadian cities, and the Unfunny Nerd Tangent took a crack at its very first event in Phoenix. Although we fought valiantly, we failed to unsheathe the Master Sword and defend the Triforce. Ganon is ruler of our realm now. All hail the King of Evil.

The timing couldn’t be better — we’re weeks away from the launch of the Nintendo Switch console and Zelda: Breath of the Wild, the first console Zelda game in more than 5 years. Defenders of the Triforce even has Switch on display, complete with a 20-minute Breath of the Wild demo. The only catch is that the winning teams get first dibs.

Losers, of course, get banished to the Sacred Realm, where Schlag, Bryan and I will float in stark-white nothingness, seething in anger for all eternity. Curse you … GANONDORF!

So what happened? We arrived early and had no trouble securing a table for our 6-person team in a large banquet room. After video and a rousing introduction from a man in Sheikah garb, we breezed through a binder of puzzle worksheets, collected Rupees and began exploring the many regions of Hyrule (really just some areas cordoned off in the next room, each of which had a different requirement for entry).

The story closely followed the Ocarina of Time video game, and Defenders gets props for including familiar characters — like Zoras, Gorons and the Kokiri — as well as the time-travel theme. The hosts (no, not that kind of host) were energetic and well-trained. Some of the costumes and props really popped, especially the torches and bomb flowers in the Gorons’ cave.

In the end, we overcommitted to what we thought was a solution as the game’s 60-minute clock ticked down. We had overlooked the tip we needed, which was buried in our reading material. We deciphered the final clue with only a few minutes remaining, but, with some gut-wrenching boss music playing, we couldn’t find the solution.

Mercifully, they still showed us a video of Link and Zelda defeating Ganon in the final scenes of Ocarina of Time. From there we got a photo op, a look at the merch table and a chance to wait in line for the Switch demo.

If you grew up on Zelda, Defenders of the Triforce is easily worth the price of admission (we paid $42 and got to take home posters). Not every puzzle is a thrill, but the solutions are satisfying. Flexing brainpower with a group of friends is so refreshing that the whole escape-room fad makes sense to me now. And nothing beats nerding out in a room full of 200+ Zelda fans in silly Link hats.

Except, I imagine, defeating Ganon. It would have been really freaking nice to defeat Ganon. Here’s hoping I can redeem myself in Breath of the Wild.