Ham radios, Northern Lights, baseball, Elvis. This ‘time-travel’ movie has it all.

Except anyone that actually travels through time.

Nevertheless, like all those on this list, #26 is an absolute favourite of mine. A film about a father and son that hits you right in the feels. 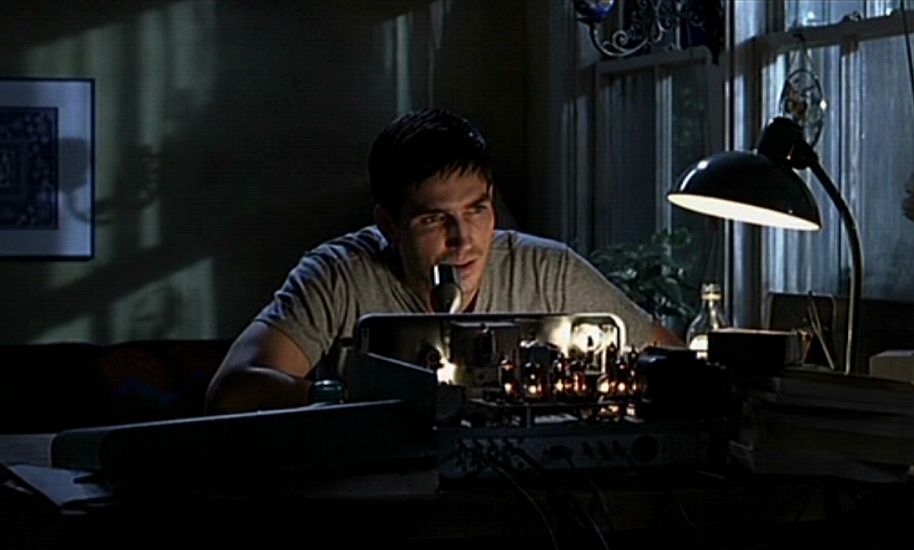 This film may not appear on many people’s ‘best of’ lists, like it does mine, but ever since I saw its trailer, I’ve been enamoured with Frequency.

It’s an unusual idea. A time-travel movie in which nobody actually travels through time. Adding to that, the story’s ‘time-machine’ is nothing more than a ham radio. Yes, a ham radio somehow affected by both solar flares and the Aurora Borealis phenomenon, but a ham radio, nonetheless.

Based somewhat in fact, the idea of a radio signal being transmitted and received between time periods does require a small leap of faith in the beginning, however, Frequency isn’t about accurate time-travel techno-babble. It’s about a father and a son, and the unbreakable bond between them both.

Personal favourite, Dennis Quaid, plays Frank Sullivan, a 1969 New York fire-fighter. In the opening scenes, Frank is immediately established as a hero; the king of close calls, saving people from situations even most of his colleagues wouldn’t dare entertain.

Quaid is excellent in this movie. He exudes charisma and charm as he does in most of his roles, but where Quaid really shines in Frequency is the heart-warming commitment to his family that he instils into Frank with every second of screen time.

The 1969 Sullivan family is portrayed with that ‘perfect’ sixties TV dynamic. Parents still madly smitten with each other, but even more devoted to their six-year-old son, John. 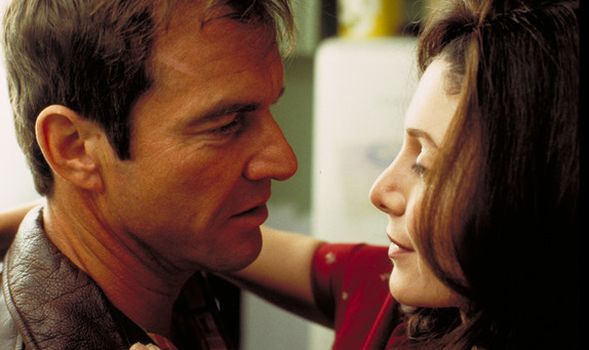 Young John’s hero-worship of his dad is obvious from the beginning, and his early fear of falling off his bicycle during Frank’s lesson seems to stem more from the idea of disappointing his father, even though Frank is nothing but loving and supportive.

Together, Quaid and young actor, Daniel Henson do a terrific job of showcasing a great father-son union, and a perfectly happy 1969 life.

In contrast, 36-year-old John’s 1999 existence emits nothing but sadness. His romantic relationship literally breaks apart in his first scene, and the loss of his father (which we learn was also in 1969) has affected him greatly. Despite happening thirty years earlier, Frank’s death hangs over John as though it just occurred, to the point where his grief has consumed him, just like a certain favourite superhero of mine.

As a Batman fan, I’ve always wanted to see Jim Caviezel in the cowl, and Frequency is the reason why. Caviezel’s performance as John is almost the perfect Bruce Wayne; the brooding, the depression, his self-imposed isolation, all fundamental elements required to play the Dark Knight. John’s instant rage later in the film during a police interrogation also screams Batman (no pun intended).

Maybe one day Caviezel will get to travel to Gotham City, but until then, I’ll continue to enjoy his work in Frequency, as he uses his new power of hindsight to save his father from dying in a fire.

One of the best scenes in the movie is when Frank, having now cheated death thanks to his future-son’s advice, returns home to young John. It’s touching that the first thing Frank does after avoiding his predetermined demise is again teach his son how to ride his bike, a lesson and experience robbed from both of them in the original time-line.

And when Frank continues his conversations with 1999 John, their exchange and John’s opportunity to once again enjoy his father’s company after thirty years, hits you right in the feels. If that scene doesn’t get to you, I’m sorry, but you might be a robot.

And then, as with all well-told time-travel stories, things change, but not always for the better. Frank’s survival changes the time-line with a ripple effect that targets John’s family once more.

A murder case that spans thirty years runs parallel to John’s own storyline, until his accidental alteration of the past causes the two narratives to intersect. Things become personal when, due to the new time-line, John’s mother, Julia (Elizabeth Mitchell) falls victim to a serial killer, now reinvigorated by the ‘new’ 1969.

Now the film shifts into a detective story when the onus falls on John and Frank to not only save Julia, but the other innocent, would-be victims of ‘The Nightingale Killer’, Jack Shepard (Shawn Doyle).

Gregory Hoblit’s direction is rarely discussed when anyone talks about this movie, yet I feel it deserves mentioning. While not a Hollywood A-lister, Hoblit is clearly a talented filmmaker, having also directed the highly-underrated Fallen, starring Denzel Washington and John Goodman.

The montages of history changing in John’s mind are brilliant, presented almost like a dream (or a nightmare). Clever editing splices Frank sliding to safety and away from the Buxton fire, with John’s falling glass, mirroring each incident beautifully. It’s a motif that continues through the film, repeated when John’s memories are altered again due to his mother’s death, and when the ham radio is almost destroyed in 1969.

Hoblit’s use of odd angles, slow motion and certain colour palettes set the tone of several ‘more serious’ scenes, such as Frank’s fire sprinkler escape from Shepard in the police precinct. It’s this low-tech approach that helps ground the film in a somewhat ‘realism’, despite its premise.

Yes, die-hard fans of time-travel like me could nitpick some of the logic of certain time-ripples, such as the burning of Frank’s desk, the suddenly-repaired ham radio, and Shepard’s various injuries, but the movie is so good, I happily overlook them.

I mean, nobody really knows how time-travel would work in real life, so let’s just give it a pass. And besides, I’m a sucker for a good grandfather-paradox, and Frank hiding his wallet in 1969 so John can recover fingerprints from it in 1999, is a great one.

The forever-solid Andre Braugher once again delivers as police detective and Sullivan family friend, Satch DeLeon. Braugher brings gravitas to each of his roles, and his performance in Frequency is no different.

The way Satch learns the truth behind Frank’s ‘premonition’ via of the 1969 World Series and its ‘shoe polish incident’ is a cleverly-handled example of the film’s subtle sci-fi roots, while allowing great character moments for Braugher.

Like Quaid and Caviezel, using a calibre of actor such as Braugher instantly gives the story more credibility, as it culminates with a duel-confrontation with Shepard, fighting against both Frank in 1969 and John in 1999 at the same time, thanks to the ham radio time link.

The ending is somewhat clichéd, but it’s so heart-warmingly full of emotion, it works. Especially the tear-inducing finale, in which John is finally able to find peace and happiness.

I love Frequency mostly because more than anything, it’s about family. About that special bond between a father and son and the lengths both will go to protect and nurture that relationship, one of the most important any man (if he’s lucky enough) can have.

So if you’re ever lonely, or in need of a pick-me-up, rather than dig out the old ham radio and hope for a Northern Lights miracle, instead, settle down and watch Frequency, a movie that no matter how many times I’ve seen it, always calls to me with a gentle, “I’m still here, Chief…” 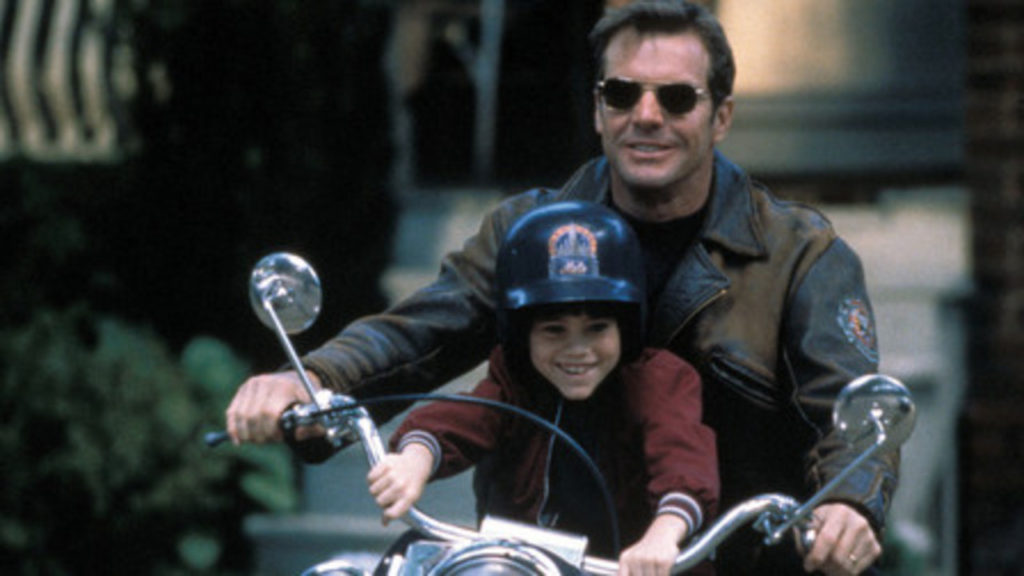 Don’t wait 30 years to grab an Unfunny Nerd Tangent shirt! Get on the ham radio and order up Mon Milfma right now!